The Most Instagrammed Skyscrappers in the World 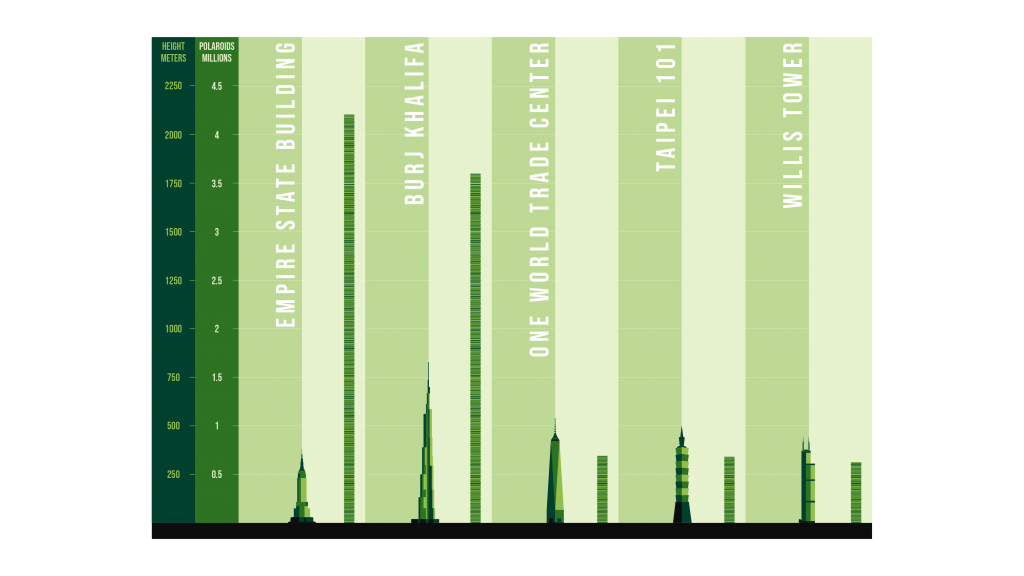 The world’s iconic skyscrapers make awe-inspiring backdrops for any Instagram post. With plenty of futuristic and architecturally diverse buildings to choose from, which of these world-famous designs has gained the title of the most popular on Instagram around the world?

We gathered research to find out the most Instagrammed skyscrapers in the world, and the results pay homage to some of the globe’s most inventive and impressive buildings. Not only that, but we wanted to see what the total height of these Instagram photos would be in comparison to the height of the buildings themselves.

It’s no surprise that the Empire State Building in the heart of New York’s Manhattan bags the top spot with a massive 4,283,025 hashtags!

This much-loved skyscraper was the tallest building in the world from 1931 to 1972, and the first to contain over 100 floors. Despite being overtaken for these accolades, its appeal is enduring thanks to its classic Art Deco design, stunning views and iconic status as a symbol of New York City. That is clearly represented in the number of photos (ie hashtags) taken of the skyscraper piled up, which towers over the building itself.

Following closely behind is the Burj Khalifa, which dominates the Dubai skyline and is currently the tallest building in the world. Standing at a breath-taking 828 metres, it has so far earned a total of 3,617,996 hashtags. It’s a must-do snap for anyone visiting the United Arab Emirate’s most glamorous city and can be seen rising majestically above the skyline wherever you are. Whilst the tallest building by a large margin, it is still not the most popular. The total of its ‘hashtagged’ photos has yet to reach the heights of those of the Empire State .

Building, but it is not far behind. This architectural newcomer has only been around since 2010, so there is still time for it to gain the top spot of most Instagrammed skyscraper in the future.

These two trailblazing buildings each bring their own unique qualities to the list – the enduring classic design of the Empire State Building offsets the belief-defying ultra-modern lines of the Burj Khalifa.

While these stunning creations stole the show, the next most Instagrammed skyscrapers are also worth a mention for their popularity and photogenic allure.

Standing proud at 541 metres, the One World Trade Center in New York earned 688,106 hashtags. It’s the main building replacing the top spot after the World Trade Center was destroyed in the terrorist attacks of 9/11, and represents the tallest building in the western hemisphere. Without a doubt, it has quickly earned its place in the hearts of Instagrammers since its completion in 2014.

Next in line is the Taipei 101 Tower in Taiwan with 680,312 hashtags. This impressive edifice held the title of the tallest building in the world from 2004 until 2010 when the Burj Khalifa snatched its crown. This landmark was designed to look like a bamboo stalk and is famed for its green credentials thanks to its in-house water recycling and cooling systems.

Coming in in 5th place, we have another American architectural masterpiece – the Willis Tower in Chicago, with 624,497 hashtags. Formerly known as the Sears Tower, it was the tallest building in the world from 1974 to 1998. Its glass balcony and stunning views of the city make it a hotspot for visitors to Chicago.

Without a doubt, any one of the skyscrapers on our list is an Instagram hero, capable of drawing in the crowds and stacking up the hashtags.

And all of these remarkable buildings include office spaces, combining beauty with practicality and providing the world’s ultimate work and play destinations. Unsurpassed in their ingenuity and attraction, they are bound to rule Instagram for a long time to come